This colourful egg-shaped piñata makes a stunning decoration and can be filled with sweets or wrapped chocolates at Easter time. 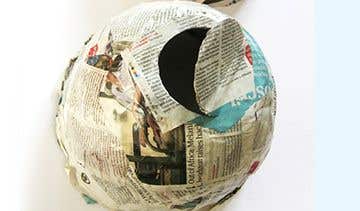 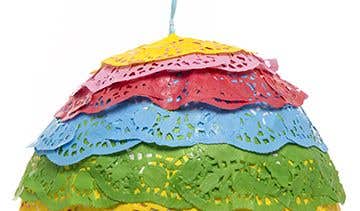 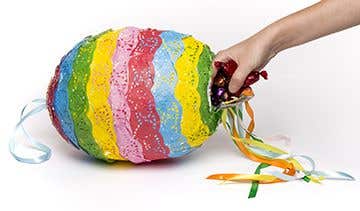 Allow plenty of time to make the 2 halves for an egg-shaped piñata. To fully dry one half can take up to 48 hours. Leaving it somewhere warm to help the layers dry more quickly. If you have 2 matching bowls, you can make 2 halves at the same time. A plastic or glass mixing bowl can be used to make the piñata. Wash the bowl thoroughly in warm soapy water after making the pinata to remove any leftover glue. If your bowl has a flat base, the papier mache can be made into a curved egg shape by adding some scrunched up newspaper with some glued strips over the top. Just do this at the top of the egg, as the base needs to be cut away into a flap.

These beautiful Fimo beads are simple to create, and once you start...

Try painting simple flower shapes onto a wooden heart as a quick...

Hama beads aren't just for kids: they can be used to create...

These fantastic Fimo pendants are so easy to make, and also make...

Washi tape is a quick way to add striped patterns to 3D...

Adorn any lapel or outfit  with this bright spring coloured floral delight.